These ones are from the Images et Loisirs series: 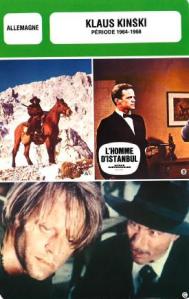 Here also are the posters I bought a little while back and forgot to post on here: 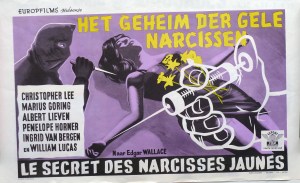 This poster is for Das Geheimnis der gelben Narzissen (aka The Devil’s Daffodil) (dir  Ákos Ráthonyi, 1961).  Klaus is not mentioned on the poster and I know there were both German and English language versions of the film, but I’m not quite sure whether this Belgian poster is for the German or English version.  In any case, it’s of interest as it’s Klaus related and the artwork is excellent.

Now, this one is special and I paid good money for this one even though I’m trying not to accumulate any more posters which I just can’t display:

Two for the price of one here – Klaus Kinski and Jean-Louis Trintignant; two of my favourites together, sigh! The Great Silence (dir Sergio Corbucci, 1968) is an amazing film and it deserves a serious review when I can get around to working on it. When…

Not so high on my list of Kinski films is James Glickenhaus’ 1982 action movie The Soldier – or as I know it, The Soldier Ken Wahl:

See, no mention of Klaus even though he deserves it for wearing those tight white ski-pants and that headband… 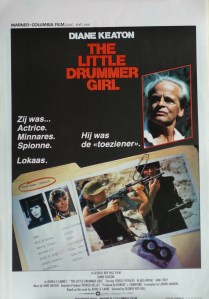 I’ve lost count of how many The Little Drummer Girl (dir George Roy Hill, 1984) posters and lobby cards I have and yet I’ve not even got around to watching the film yet. One of these days…

All the classics here, uh? Yet another action movie, Code Name: Wild Geese (dir Antonio Margheriti, 1984), and I guess I should review it but I’m part way through reviewing Commando Leopard right now and I can’t face doing two action movies in a row so this one will wait.

Nothing need be said about this one really:

Except… Who can believe the Klaus Kinski-Werner Herzog classic Fitzcarraldo was made in the same year as The Soldier Ken Wahl and Love and Money?!

Finally, another poster I shelled out good money for because it’s so special.  Remember I mentioned the film posters exhibition at The Riverside in Hammersmith some time ago because you could buy special reprint copies of the La peau de torpedo film poster? Well, I got me an original one: 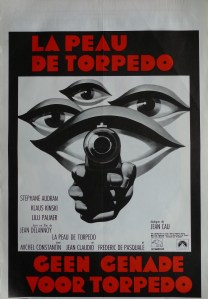