Good old Just Jaeckin has an eye for making perfect matches. In 1968 he suggested teaming up Jane Birkin with Serge Gainsbourg in Pierre Grimblat’s wonderful film Slogan, and anyone with any taste knows just how fruitful that partnership was. In 1977 he did something just as wonderful, when he hid the Swiss photographer Beat Presser under a blanket and smuggled him into a castle near Paris. No, he wasn’t abducting him or forcing him to play a role in the Story of Ô, what he was doing was sneaking his friend onto the set to meet the actor Klaus Kinski. There were already two photographers from the Sygma agency contracted to take photographs on location whilst Jaeckin’s film Madame Claude was being made, so if Beat Presser was to get a photoshoot with Kinski the operation would have to be done undercover. Once in, Beat Presser gave Klaus Kinski a copy of the magazine he then worked on, Village Cry, and asked him if he would like to appear on the cover. A great way to flatter Mr Kinski’s ego and get his interest, I’m sure. So the story goes, Kinski examined the magazine and then finally asked, “Only on the cover?” 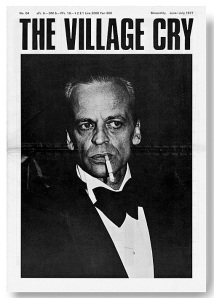 The photoshoot was arranged and I have to say that out of that first session Beat Presser produced my very favourite photographs of Klaus Kinski. Beautiful, dramatic black and white portraits of Klaus looking handsome and incredibly dapper in formal evening wear; photographs capturing the essence of Klaus – elegant, disdainful, defiant, and war 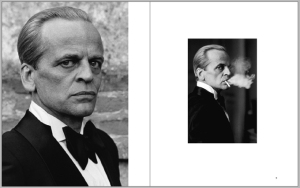 y. Naturally all 10,000 copies of the issue of Village Cry featuring these photographs sold out very quickly. Wah! I want one!

It wouldn’t be surprising if this latest book KINSKI Fotografiert von Beat Presser, published by moser verlag, sells out too. Whilst only 62 pages long, this book (which serves as the catalogue for the KINSKI exhibition at Westpreußisches Landesmuseum in Münster, open until 3 October 2011 – http://www.westpreussisches-landesmuseum.de/index.php/kinski) is packed with plenty of photographs.

The photographs included in this book are from the Madame Claude shoot in Paris, France 1977 and from the Werner Herzog films, for which Beat Presser was hired as a camera assistant and stills photographer – the Fitzcarraldo shoot in Peru 1981 and the Cobra Verde shoot in Brazil and Ghana 1987. 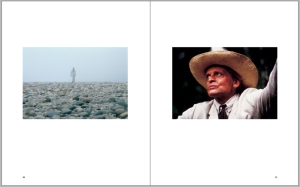 And that’s not all, there’s a two page introduction to the book by Kinski’s partner in crime, Werner Herzog (there’s no denying it, they have both produced their best and craziest work together), and two pages of text by Beat Presser – unfortunately for us English speakers, it’s all in German. Werner tells the story about Klaus being questioned by a doctor for a medical, losing his temper and breaking a glass table, then being terribly apologetic about it; Beat Presser talks about the trials and tribulations of working on Fitzcarraldo and how Klaus raised his voice, out of nowhere, from zero to one hundred – screaming at Werner Herzog for a good ten minutes before eventually stopping and saying to Beat Presser: “Do not worry because sometimes, Beatus, I do all this to keep my voice intact.” Excuse poor effort at a translation, something tells me I need to brush up on my German if I am to get the most out of these texts…

The Madame Claude portraits I’ve already discussed – very formal, very posed – only complaint with this is that I personally would have liked to see the photograph of the back of Kinski’s head in this selection, but you can’t have everything. Talking of the back of Kinski, Beat Presser manages to get away with asking the egotistical Klaus to turn his back to camera in the very famous shot of Klaus stood at the foot of the valley with the huge steamboat being pulled over the hill; he looks great for it (hands in pockets, of course). My favourite shot from Fitzcarraldo is the one used on the cover of the book, which is reproduced inside the book in black and white and shows Klaus looking strangely vulnerable with his wild hair and his collar sticking up slightly. Those eyes! That mouth!

In Beat Presser’s photographs Klaus looks by turn joyful, livid, crazed, concerned, and arrogant. Sometimes he’s directed by Werner and the crew, sometimes he appears to be directing Werner. This carefully chosen selection of photographs reveals the multifaceted personality of Kinski, ranging from his anger aimed at Werner Herzog during the shooting of Cobra Verde to the totally beatific expression on his face in a wonderful colour shot of him in Fitzcarraldo; eyes closed, lashes like pale butterflies raised towards the sun, lips pursed, utterly peaceful and divine. It’s so hard for me to explain just what’s so good about the photographs, but if you love Klaus Kinski you are certain to love Beat Presser’s photographs.

When I first got in touch with Beat Presser requesting information for Du dumme Sau! I said to him, “Your camera loves [Klaus]” and he said, “I guess he loved my camera as well…” I guess he did! Check out KINSKI Fotografiert von Beat Presser for yourself and see what you think. Buy the book, look at the images and drool over Klaus – it’s what Klaus would want. And, oh yeah, go to one of the Beat Presser Kinski exhibitions in Münster or Bogotá too!

The book is now available to buy through Amazon and other bookstores.

Photographs reproduced with kind permission of Beat Presser.  Thanks to Beat Presser and moser verlag, www.moser-verlag.com