For Valentine’s this year, I got a card purported to be from Klaus Kinski, ahem!  It arrived at the same time as my boyfriend Dave.  Odd that…

Anyway, later we were watching Klaus in Venom (it’s so entertaining, do see it if you haven’t already) and Klaus said, “I don’t like that Dave”, so I guess Mr Kinski doesn’t approve of my boyfriend making me cards on his behalf!  It’s good though, isn’t it?

What else? Well, I’ve got some exciting Klaus related interview opportunities in the pipeline, so watch out for some interesting Klaus info on the blog shortly.  In the meantime, here’s a great picture of Mr Kinski from Venom (dir Piers Haggard, 1981), which I’ll review some time soon. 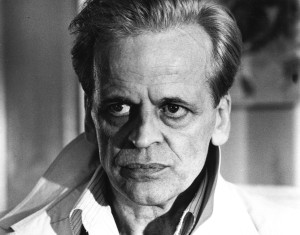 I love films (anything from exploitation stuff to stylish Eastern European cinema, but I'm not really into blockbusters and modern Hollywood), music (Serge Gainsbourg, Jane Birkin, Michel Polnareff, Left Banke, Francoise Hardy, The Seeds, Love, The Zombies, etc) and books (Kurt Vonnegut, Julian Maclaren-Ross, Michel Houellebecq, Patrick Hamilton, Alan Sillitoe, and more). I take photographs with my Lomography Diana F plus or my Olympus Trip and like making stuff in my spare time.
View all posts by tinynoggin →
This entry was posted in Photos and tagged Klaus Kinski, Piers Haggard, valentine's card, Venom. Bookmark the permalink.