Basic plot: Dominique’s antique dealer husband, Nicolas, goes off on mysterious trips without her and does not let her in on the details of his secret life.  She believes he may be having an affair and tracks him down to a woman’s apartment in Paris.  By accident Dominique shoots her husband and the unknown woman, with her husband’s gun, and then flees the scene.  What she doesn’t realise is that he was part of a spy organisation.  Her little accident has massive repercussions, not only for Dominique, but for many others who want to know just how much Dominique knew about her husband’s covert activities…

Filming location: Paris and the Studios of Boulogne 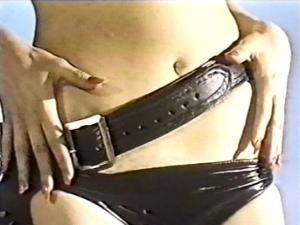 Availability:  This film does not appear to be currently available anywhere – if anyone reading this finds an official issue anywhere, please let me know as I only have a dodgy copy (with something like Greek subtitles and a couple of bad quality bits at the beginning; I gather it must have been a video to DVD conversion) that I picked up at a film fair.  My copy is only 98 minutes long and IMDB says that the film is 110 minutes, so I seem to have some footage missing from mine, although the story appears to be intact.

The film in full – *SPOILER ALERT*:

Okay, first things first – don’t expect Klaus to rock up until 74 minutes into the film.  In the meantime, enjoy the incredibly stylish opening credits and the wonderful soundtrack by the very talented François de Roubaix (he who provided Harry Kümel with the Daughters of Darkness soundtrack, which is just about one of the best soundtracks ever).

The story – it’s a very basic spy incident gone wrong plot.  You’ll never get to the bottom of what all the spying was actually about, so don’t bother trying to work it out.  Anyway, the story starts at New Jimmy’s Club (which coincidentally was also the club where Klaus was partying in Madame Claude) where Dominique (played by Claude Chabrol’s glamorous wife, Stéphane Audran) is getting drunk and picking up a playboy.  She takes him home with her but comes to her senses before getting into anything with him; she’s only rebelling because her husband Nicolas, reputedly an antiques expert, has gone away on one of his extended, mysterious trips away without her.  She’s at the end of her tether but not quite ready to cheat on him just yet.

When Dominique discovers from her friend that Nicolas is in a Paris apartment with another woman, she heads off there in search of answers.  Unfortunately the encounter goes terribly wrong and Dominique accidently manages to shoot both her husband and the woman, without even getting any answers as to what her husband has been up to for the past few days.  Nicolas is dead but the woman, Françoise, has sustained injuries and is in a critical condition.  Dominique has already fled the scene and escaped on a fruit truck with a couple of hippies and a kitten.  A kitten on a lead.  Strange but true.

A woman called Helen is rather concerned that Nicolas and Françoise do not answer the telephone when she calls – she sends a man over to check the apartment as she’s not sure where they are.  The man tells Helen that it seems the incident was a crime of passion but that Françoise is still alive, just about, in hospital.  Helen sends her flowers and a bottle of expensive perfume – but rather than being something to cheer up Françoise, the gift is Helen’s way of killing off an infirm agent by perfume osmosis inhalation (or something ridiculous like that).  The death of captured agents is a recurring theme in the film; no one must talk! 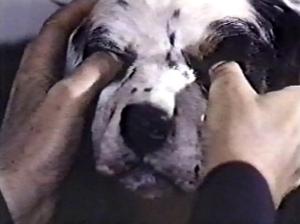 In the meantime, the police are uncovering some of Nicolas’ work and finding that there is more than meets the eye to the death of a man who variously claims to be an antiques expert and also, I gather from some passing comment, an insurance salesman.  They now have 64 pages of microfilm to study – and a gun; the one Dominique used to shoot Nicolas has been found by the truck driver and handed in to the police, so they know now roughly where she has fled.  The plot thickens…

In the meantime, Dominique has semi-reluctantly boarded a trawler boat with a guy called Gianni who was earlier trying to chat her up at the harbour – she has very little choice as she has nowhere else to go.  He turns out to be a fairly decent sort except that his wooing extends to serenading her with a song he composed himself called something like J’aime.  It seems to be working on Dominique, she’s definitely warming to him, and then he goes and spoils it all by doing a verse where he whistles.  Nice try, Gianni.

Back in Paris, hatchet-faced Helen has contacted yet another of the men she

has at her beck and call and asked him to take on a mission where the results are bound to be practically zero – he cannot refuse, for whatever reason, and because the job is risky she gives him a parting gift of a pill of death: a capsule which when bitten open poisons the user instantly with potassium cyanide or some such.  You can keep the capsule in your mouth as it’s insoluble, even in gastric juices – and you simply bite it open if / when you need to self-destruct.

Helen believes it’s possible that Dominique was in on Nicolas’ plans and / or that she was working for another organisation.  She wants her eliminated before she’s arrested and talks.  She also wants the microfilm; even though this guy has slim to no chance of finding it without getting caught, which means certain death as a caught agent must self-destruct.  She doesn’t ask for much, does she?

The guy searches the apartment unhindered, a sure sign that the microfilm has already been located by someone else, otherwise he would certainly have been apprehended during the act.  This now means he has to ensure he is not tailed by anyone before meeting up with stoney-faced Helen – if he is, he is under orders to self-destruct so as not to give away her whereabouts.  Unlucky.  He’s tailed here, there and everywhere – he can’t even get a few moments shuteye in t

he park without being watched, and he has to go to the toilet to eat a slice of cake in peace, before booking himself into a hotel-by-the-hour to top himself.  And when Helen reads about his death in the newspaper she does not bat an eyelid – a heart of gold that woman’s got!

Finally, finally, the moment we’ve been waiting for – Mr Klaus Kinski’s arrival.  He saunters in all casual like, hand in pocket as usual (goes without saying really) and says to vinegar face Helen: “I bet you’ve been looking for me! My name is Pavel Richko.  I’m travelling on a Finnish passport, and I’m here for… serious business.  You are a friend.  You came to meet me at Le Bourget.  And I’m going to kiss you! Smile! Smile, that’s an order!”  Good old Pavel! 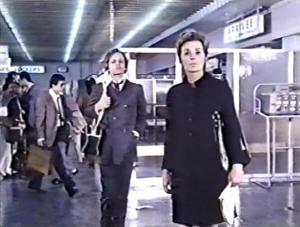 Pavel is way too blasé for Helen, so when he later arrives at her apartment, announcing that it’s “not exactly chee

rful, is it?”, she’s not best pleased.  He’s been shopping and wants to show Helen his purchases – she doesn’t seem to approve of the brightly coloured dressing gown he couldn’t resist: 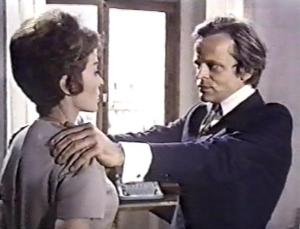 Trying to take Pavel in hand and making the mission more formal, Helen snaps: “Let me remind you that I am responsible for this operation!”  To which she gets short-shrift from the unrelenting Pavel: “And let me remind you that I have complete freedom of action, means and method.  And that goes for the colour of my dressing gown!”

Their mission begins later, when Helen arrives to wake up Pavel, who is snoozing in a mauve shirt, open to about half way down his chest.  Disapproving Helen might be but even her hatchet face appears to soften at the sight of the very cute Kinski dopily awakening.  Remembering herself, the ever ready Helen asks Pavel if he has a capsule, just in case; he does.  He might be laid-back but he is prepared after all.

Helen has located the whereabouts of Dominique and wants to head off there by speed boat.  Pavel gets his rubber suit and harpoon packed and j

oins her for the ride.  Helen waits in the boat whilst Pavel, all rubber-suited up, dives into the sea and boards the trawler boat (have you noticed she never actually gets her hands dirty herself?). And even though Gianni is no longer singing J’aime, Pavel still needs to kill him anyway so shoots him with the harpoon gun ASAP; he probably heard about the whistling chorus – you just can’t afford to take any chances…

Pavel doesn’t have so much luck with Dominique and whilst in pursuit of her he falls to the deck below and breaks his back.  Poor old Pavel! He’ll never get to enjoy his colourful dressing gown now!  Seeing some kerfuffle going on on-board, Helen wastes no time in departing the scene in the speed boat.

The police, who had boarded the boat in secret to arrest Dominique after a tip-off from sneaky Gianni, have arrived on the scene and are withholding Pavel’s capsule from him.  He’s the closest thing they currently have to a link to the case and they need answers, so Pavel won’t get an end to his pain just yet. Or will he?

Suddenly hard-faced Helen finds herself surrounded by the police and has her capsule confiscated so she will now live to talk – this means the police don’t need Pavel after all and because policemen are always helpful, as you know, they decide to do him a favour by letting him take his capsule and put himself out of his misery.

The police tell Dominique that she probably won’t even have to go to trial as she’s been helping them with their enquiries (sounds unlikely but she seems to swallow it) and so they drive her and Helen away to face further questioning.  But the case is one that is destined never to be solved as, when the police make a stop at a service station, a car pulls up alongside them and a man shoots Helen through the car window.  The police now want the man instead – and they want him alive!

Do you know what?  It was a good enough little film – nothing amazing, but some nice cinematography, an excellent soundtrack (which I keep going on about!) and enough action and intrigue to keep you interested.  And a totally camped-up performance from Klaus as the maddening Pavel is well worth a watch. 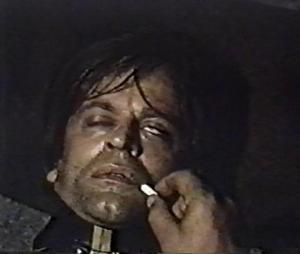 Let’s hope that someone brings out an official version eventually. 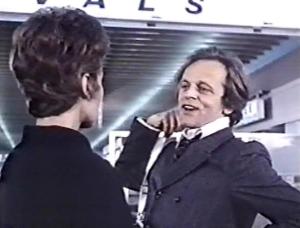 You know I go on about Klaus always having his hands in his pockets, but this performance really takes the biscuit.  From his first appearance at the airport he has his hand in his pocket, then he continues like this even when he has his other arm linked through (the reluctant) Helen’s, until she gets out of his grasp and he instantly puts his other hand in his other pocket and does a double-pocketer.

Then when he arrives at her apartment he walks down the stairs and through her apartment with one hand in one pocket and the other holding his shopping bag.  He just cannot refrain from putting his hand in his pocket.  Although he pretty much has to when he’s in the rubber suit, but that’s probably the only reason why he hasn’t got his hands in his pockets then; because he doesn’t have any!

Other information about the film:  The film was shot in early summer of 1969.  It was Kinski’s first French film.