Well, I have finally got my Berlin holiday photographs back so now I can provide a little update on Kinski related places to visit in Berlin.  I didn’t manage to get around everywhere I wanted to go but I did see and photograph a few more places, and revisited a couple from Part One to get better photographs too. 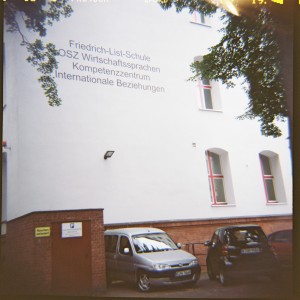 Klaus Kinski attended the school in 1936 – or maybe he didn’t, as he claims to have skipped school for seven months because he preferred to hang around the streets!

Another place I previously visited in 2010, but here’s a different shot of it – the Paris-Bar,  Kantstraße 152: 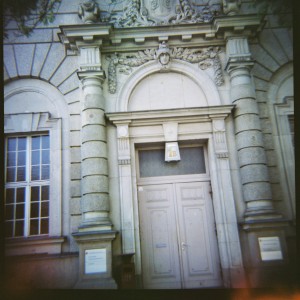 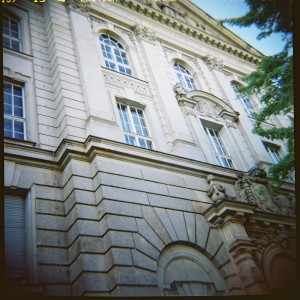 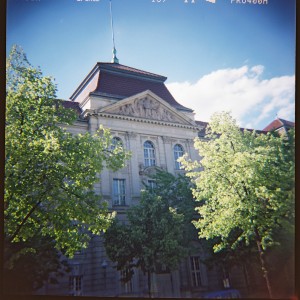 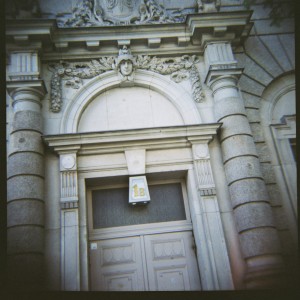 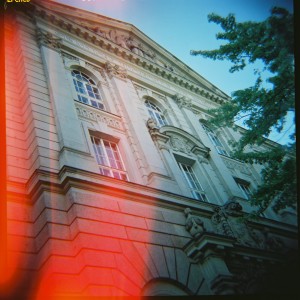 From 7 – 20 June 1958, Klaus Kinski performed his Rimbaud recital at the Kammerspiele in der Kongreßhalle, John-Foster-Dulles-Allee 10.  Then from 26 June – 4 July 1958 he performed his Villon recital there, and a show of extracts from Villon, Rimbaud, Goethe, Schiller, Wilde and Mayakovsky on 2 December 1960. 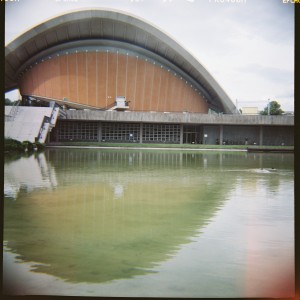 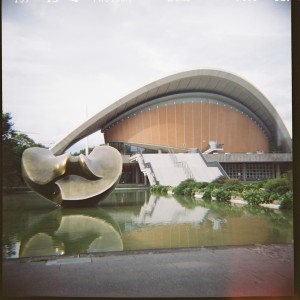 Whilst at the Kongreßhalle, I took the opportunity to hang out in the Tiergarten: 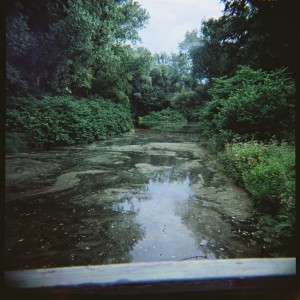 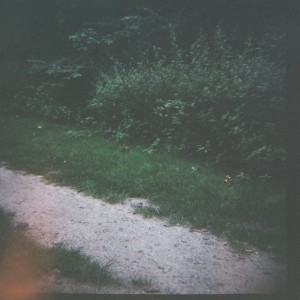 It’s kind of apt that this photograph of the bushes came out a little dark looking (and there’s a bunny rabbit in front of the bushes if you look hard enough), as it was in the Tiergarten that Klaus met the mysterious British Countess who wrote to him asking him to recite the Hamlet soliloquies for her, alone in her castle.  Over to Klaus:

“One week later she calls me up.  We are to meet in the Tiergarten.  You never know.  We take a long walk, and she rattles on about Hamlet.  She’s not pretty, nor does she turn me on particularly.  If worse came to worst, I could f*** her right in the Tiergarten.  Then I wouldn’t have to go to England, where the beer is as warm as p*** and has no head.  Her Hamlet obsession is starting to get on my nerves.

It’s drizzling.  I suggest that we take cover in the bushes to escape the rain, and so we charge into a thicket.  We find a place where we can’t be seen from anywhere.  I strip her naked and lay her out on the damp soil; she’s embarrassed because she’s having her period….

Long past nightfall I say I have to leave.  She remains lying in the bushes.

…Two weeks later Scotland Yard phones to ask if I know where the countess is; they say she hasn’t returned to England and that she left my address behind.  I tell them I don’t know her.  That she did plan to visit me but never called.

So the countess has vanished.  What’s next?” 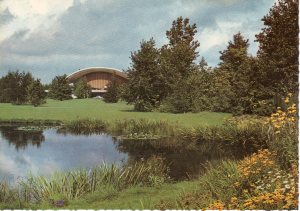 Here’s a vintage postcard I found of the Tiergarten and the Kongreßhalle.

Next up is the Standesamt Berlin-Charlottenburg, Alt-Lietzow 28: 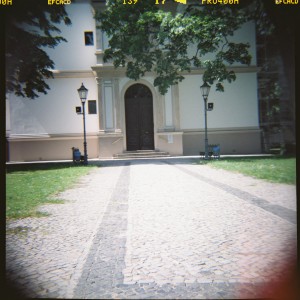 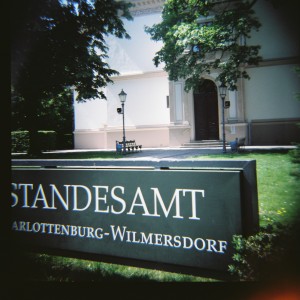 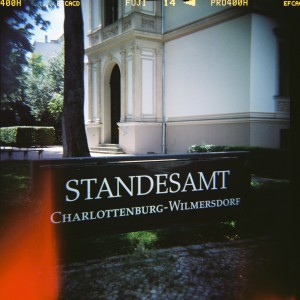 This is where Klaus married Ruth Brigitte Tocki on 31 October 1960.

Now, this is somewhere that Klaus did NOT perform, apparently – the Schiller Theater, Bismarckstraße 110: 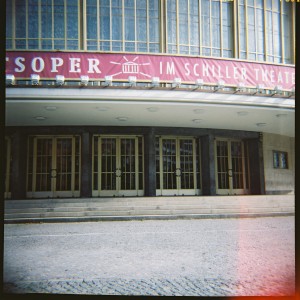 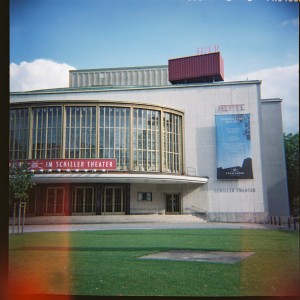 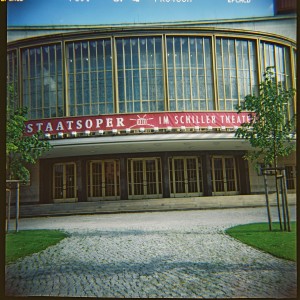 The reason the Schiller is mentioned is because…:

“Some asshole artistic director has the nerve to keep asking me if I’d be willing to perform at Berlin’s Schiller Theater.  His assistant keeps calling me, but I tell him: “You could offer me any amount of dough, but I’d rather do the lousiest movie than set even one foot in your graveyard!””

So, there you have the “graveyard” that Klaus avoided at all costs! 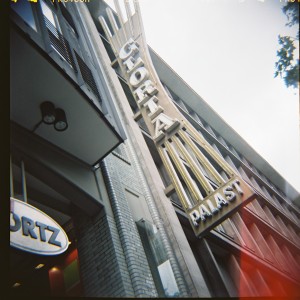 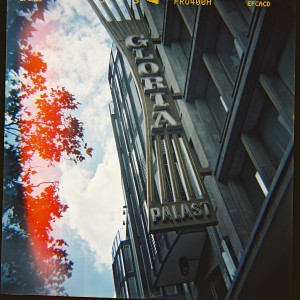 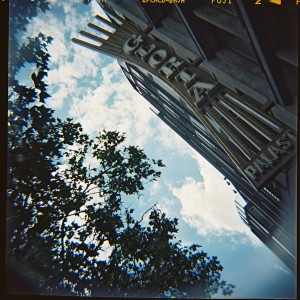 Again, I won’t repeat the entire story but Klaus met an usherette at the Gloria Palast and took her back to his apartment on Uhlandstraße.

Next up another theatre Klaus might not have actually performed in, but he does claim to have rented it for his recitals in Kinski Uncut (p129) – the New Philharmonic Konzerthaus, Gendarmenmarkt 2: 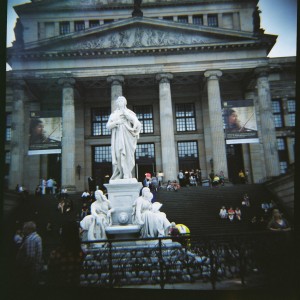 Now, I believe this to be correct but I’m not sure – the Ellington Hotel, Nürnberger Straße 50-52, is on the site of the old Berliner Theater where Klaus performed Villon, Rimbaud, Hauptmann and Wilde for ten days running from 12 -21 June 1959: 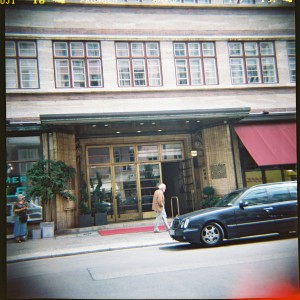 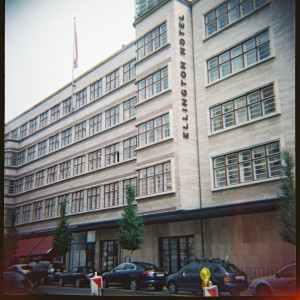 In mid July 1958 Klaus went to stay with his brother Hans-Joachim at Berchtesgadener Straße 20: 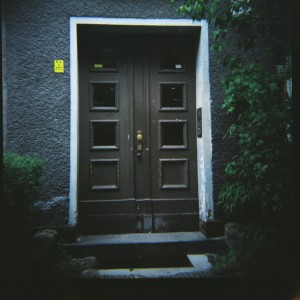 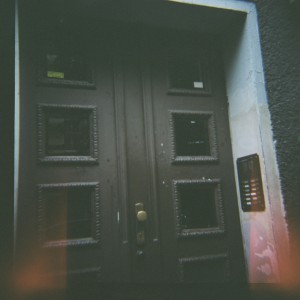 By the end of August that year, Klaus moved into a new place at Prinzregentenstraße 9: 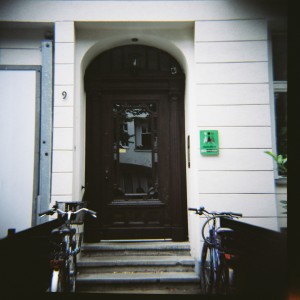 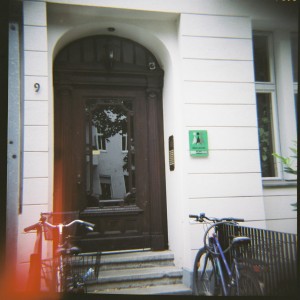 In 1952, whilst working on Der Idiot with Tatjana Gsovsky, Klaus moved into her apartment at Fasanenstraße 64: 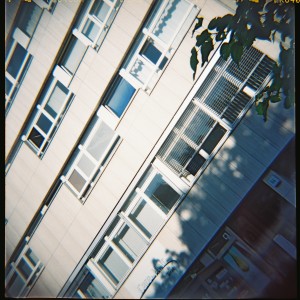 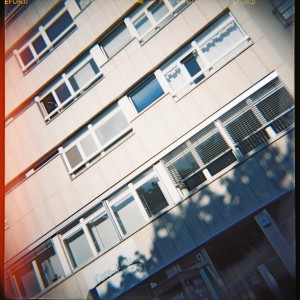 In Kinski Uncut (p110), Klaus says:  “In Berlin, I live with Tatjana.  She makes my bed, cleans my room, cooks for me and takes care of everything else.  She also trains sixteen hours a day.”  Sounds like the ideal landlady!

I have one more location photograph, but for the life of me I can’t find the reference to the location in any of my books now – I will seek it out and include it at a later date.

Finally, here is some Klaus Kinski graffiti artwork found by chance in the streets of Berlin.  Looks like Cobra Verde maybe: 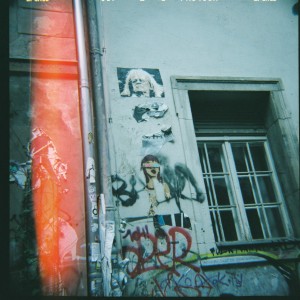 Information and dates taken from Kinski Uncut The Autobiography of Klaus Kinski (Bloomsbury Publishing, London, 1997) and Kinski die Biographie by Christian David (Aufbau, Berlin, 2008).  Photographs by me, taken with my Diana F+ camera.