Here’s a few things I thought I should include in an update:

I recently saw a film by Luigi Cozzi called Il tunnel sotto il mondo (Tunnel Under the World) from 1969.  It’s an unusual film, which appears to play with different temporal and spatial schemes by relating a series of events from the various points of view of characters.  Or maybe it doesn’t, it’s difficult to tell!  But it was an interesting early film from Kinski’s co-director on Nosferatu a Venezia (Nosferatu in Venice; Vampire in Venice, 1988) and you should see it if you can track a copy down.  The reason I mention it here is because as I watched it I felt convinced I’d seen Klaus on the screen and had to re-wind the film to check it – no, I wasn’t seeing things, there was a huge poster for 5 per l’inferno (Five for Hell, Gianfranco Parolini, 1969) in one scene: 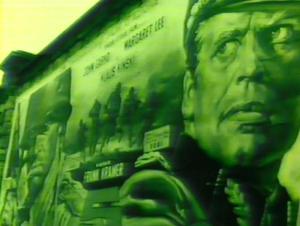 I realised recently that I had totally forgotten to upload the photos I took of the Hotel Doelen when I went to Amsterdam last year.  Nothing too exciting, except that this was the hotel Klaus used in the film Lifespan (see my review of the film here:  https://dudummesau.com/2011/02/09/klaus-kinski-makes-the-bed/) and where he trampled all over the bed! 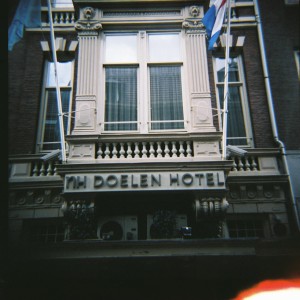 Thanks to Leigh Ann for sending information through about the Kinski perfume, which was produced under licence to Kinski Productions last year to mark the 20th anniversary of Klaus’ death.  I must admit it was a bit difficult to find out about the perfume as it’s not very widely available and I purchased mine from Luckyscent in America, who kindly sent through a few sample bottles for me too so I would be able to keep my bottle intact, here it is: 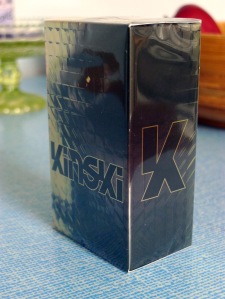 Since purchasing it I have found out that it is now available through Harvey Nichols in the UK, and not a bad price at £86.  I used all my samples up fairly quickly so unless I break into my bottle I won’t be wearing again!  It’s a unisex fragrance which I think smells rather mossy – a bit like Klaus would have smelled after he’d been behind the bushes with some conquest, no doubt.  The perfume was developed by Escentric Molecules who are well-known for their fragrances which mix with your natural pheromones to create an individual scent for you.  The Kinski fragrance is described as “animalic… woody… feral… oceanic…”  I was expecting it to be something like Grenouille’s perfume in Patrick Süskind’s novel Perfume, or at least that it would make me as appealing as Kinski and men would throw themselves at me as both men and women threw themselves at Klaus – but that wasn’t the case!  It’s a very pleasant smell but I must admit that not one person commented on the perfume when I was wearing it, so it’s obviously quite subtle.  If you want to smell like Kinski, though, you need to try it and buy it for yourself.  The packaging is lovely and I am sure the perfume is too but I just can’t bring myself to open my bottle.

Finally, here’s an item about Christian David’s Kinski die biographie (Aufbau, 2008).  Jari wrote in to ask why one sentence in the book had been censored in black pen.  My copy doesn’t have such censoring in it, so I asked Jari to send a photograph of it:

The sentence that was censored reads: “…sie teilten die Erfahrung von Einsamkeit und Selbstzweifel sowie eine geringschätzung des eigenen Körpers, eine Neigung dazu, sich andere zu verkaufen.”  I asked Christian David if he was able to tell me anything about this and he kindly sent the following information:

“Regarding the censored sentence: It is about Minhoi Loanic/Kinski. And it says: “… they (Klaus and Minhoi) shared the experience of loneliness and self-doubt, as well as a contempt of the body, an inclination to sell themselves to others.” After the book came out, someone thought I had been referring only to Minhoi, thus suggesting she had literally sold herself (or her body) to others. So the sentence was “eliminated” by Aufbau in order to avoid any potentially libellous interpretation by a third party. It later became clear that the sentence was in no way incriminating, and it was “restored”. Which makes the censored copies sort of a rare breed.”

Which means that Jari’s copy is fairly unusual!

Thanks to everyone who contributed information for these items.  That’s all for now – I hope to write another review shortly.  Not sure what I’ll tackle yet…