Klaus Kinski and the sexual microphone 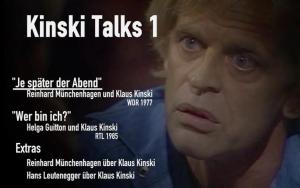 How can you review a German interview DVD without subtitles when your German is, let’s say, a little rusty?  Well, you don’t as such – you take loads of screen grabs to keep everyone’s interest and hope that they don’t realise just how little you understood… O well, I try my best.  So, here’s my impressions after watching Kinski Talks 1, another one of the stylish Klaus Kinski Estate Editions compiled by Peter Geyer.

Here are my nonsensical ramblings about KK who is looking good – very good – in the first interview, Je später der Abend, from 1977.  Klaus is interviewed by some chap called Reinhard Münchenhagen and joined on the settee by some unidentified bloke who enjoys chain smoking as much as Reinhard and Klaus do.  Honestly, I can’t tell you a lot about this interview except KK appears to be on form, making everyone laugh, interacting with an audience member and getting into heated debates.  I wrote some notes whilst I was watching the interview as follows:  Ich spiele nicht, ich bin das; Have you read my book? What is it called?; monologues at the Berliner Sportpalast; the German public; and The Rolling Stones.   I don’t expect you to piece that little lot together as I can’t and I did actually see the interview…  All I remember is that Klaus was wearing double denim (and somehow managed to get away with it) and jazz shoes, with his shirt open almost to the waist (did he never master the press stud?) and he was pulling strange faces throughout the interview too – what’s the business with the tongue?!  The interview?  Probably very clever, but with my limited German I could only focus on the visuals but for that alone it was definitely worth a look: 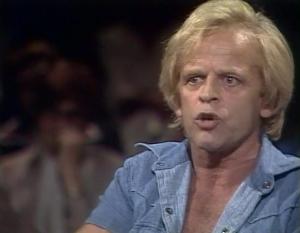 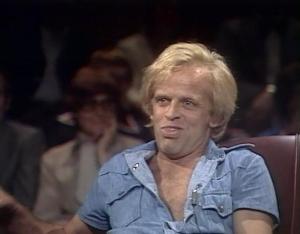 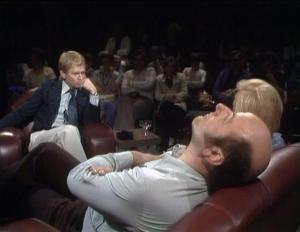 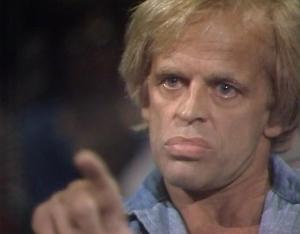 As a bonus there is an interview (about the interview) with Reinhard Münchenhagen on a golf course.  Needless to say I couldn’t understand that either.

The second interview is painful to watch – o dear, Klausy, you were a very naughty boy! But also, what a difference 8 years makes, Klaus looks so much older in this interview than the previous one.  This one is from 1985 and is called Wer bin ich?  The interview was conducted by the rather lovely looking Helga Guitton who appears to have the patience of a saint, even if she doesn’t have any interesting questions to ask KK.  My German is limited and even I know that her questions are vapid and annoying.  The interview seems to be some kind of promotional thing for Antonio Margheriti’s Kommando Leopard, which I have to review some time on here.

Anyway, what can I tell you?  Klaus is in a hotel, eating a very big meal (I lose track of the number of courses throughout this 75 minute sort-of-interview-type-thingy), ignoring the beautiful Helga and directing his non-responses and naughty jokes to his friends who are (mostly) in the off screen space.  First off, he makes a grab for Helga’s microphone that he seems to think is a bit sexual, which could explain why later in the interview he pretends to masturbate it; however, it does not explain why he tries to squeeze a lemon on it as well.  The mind boggles…

Helga asks about Kommando Leopard but Klaus is having none of it; maybe he had seen the film and wanted to forget it as much as the next person.  I’m only guessing… Instead Helga is forced to address what I first thought of as “the red jumper twins”:

The guy on the left is called Georges (or something – I couldn’t find out his name, actually) and the guy on the right is Hans Leutenegger.  Apparently he was a famous bobsledder and he won a gold medal and everything.  He also took a role in Kommando Leopard as the Capitan and was a good friend of KK.  Georges, well, he was also in Kommando Leopard, apparently, but although he says he played the role of the Commandante I can’t see any Georges (or any variation on the spelling) in the credits on IMDB, so I don’t know what happened to Georges…

Anyway, it is Hans Leutenegger you have to watch – he’s great.  He looks like Bob Carolgees of Spit the Dog fame, but he sounds like Slavoj Žižek (although he is Swiss and not Slovenian).  He is very funny – watch him any time the camera moves over to his side of the table, he looks directly into the camera very happily.  He seems like a very nice chap and furthermore he is also responsible for my favourite moment of the interview, but more on that later.

So, where was I?  Sexual microphone… Kommando Leopard… Yes, KK is obviously in a very naughty mood as he says to Helga: “Du bist ein mann?!”  You’re a man?!, well, Klaus finds it amusing anyway.  In fact throughout the interview KK seems to alternate between being a bit annoyed and making himself laugh.  One minute he is not answering questions at all, the next he is monologuing on the subjects of America, the youth, stupid questions, an Italian singer whose name I couldn’t catch, slogans on t-shirts, journalists, etc.

Klaus Kinski is the only person I know who can get angry about stickers.  Did that really happen in the interview?  I believe so, but you’ll just have to buy the DVD for yourself and see.

What else?  Klaus enjoys his food (see the sandwich eating scene in Creature for another example of this) and he doesn’t seem to care one jot that he is being interviewed – he tucks into a variety of dishes and doesn’t stop eating or drinking for the duration.  At one point he appears to spear about 15 prawns on his fork before taking a mouthful.  He also seems to order fresh cold beer every time his reaches room temperature.  And he doesn’t want any Yugoslavian coffee, only Italian! 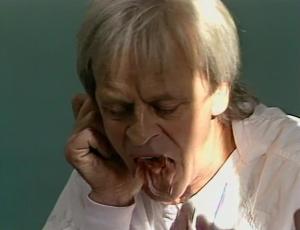 Mr Klaus Kinski, aged 58, gets angry about newspapers saying, “Mr so and so, aged 42”.  A great moment to involve Mr Hans Leutenegger, aged 45, in the interview:

What about Helga?  Well, poor Helga seems to piss Klaus off whatever she does or says but she is very resilient.  When Klaus says to her, “Give me a break!”, she says something along the lines of, “What does Give me a break mean?  A rest or…”.  I take it Klaus meant “or…”!

What else did I notice?  Klaus’ outfit looked like some kind of hospital gown – I know he liked his whites and beige colours but that top looks like it fastens up at the back with ribbons.  I learnt a bit of vocab – thanks to Klaus I now know quatsch,  lächerlich, and blöd.  Yes, he was VERY dismissive of the interviewer.

Finally, my favourite bit in the interview involved dessert.  After some discussion Klaus decided to order dessert.  He’d already ordered the Italian coffee what seemed like an age ago and it didn’t appear to have reached the table yet.  Luckily he did not notice that, otherwise there would have been hell to pay.  But anyway, this lovely looking dessert arrived:

Yummy, yummy, yummy!  You’d think he’d tuck in straight away, right?  Wrong!  He proceeded to play with the dessert for an age, stirring it and chopping at it and then very occasionally taking a mouthful.  At one point he got into yet another heated debate with Helga and whilst his attention was drawn away, Mr Hans Leutenegger, aged 45 (aka Herr Forty-Five), took a sneaky spoonful of Klaus’ pudding! 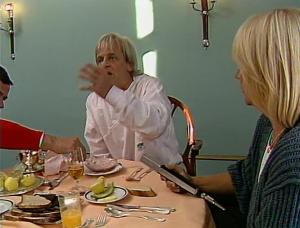 Brilliant!   Then the coffee arrived just before the end of the interview.  It took so long I wonder if they had to get some coffee shipped in from Italy especially for Klaus. 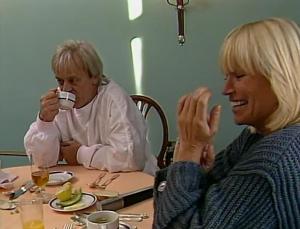 As this has not exactly been an enlightening review, here’s a few more screen grabs to make you happy: 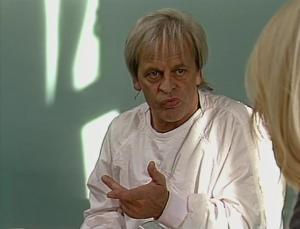 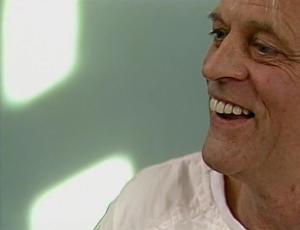 And just because it amuses me, another picture of Klaus with Hans Leutenegger: 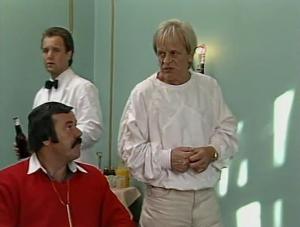 So, if like me you don’t understand much German, is it worth buying Kinski Talks 1?   Well, you’ll probably want the DVD after seeing the screen grabs and you’ll probably need to see it just because what I have to say about it makes little or no sense.  In fact if any German speakers out there want to tell Du dumme Sau! what the interviews are about, I’d be very happy to hear from you.

POSTSCRIPT:  Having consulted Christian David’s fabulous Kinski Die Biographie (Aufbau Verlag, Berlin, 2008), I see that basically the Je später der Abend interview consisted of Klaus avoiding answering any questions at all.  David says that nothing new was revealed about Klaus, his life or his creative output, and that he turned the interview into a monologue about the fact that people constantly misunderstand each other.  Apparently he continually questioned the host on what he meant by certain questions, indicating an apparent total incomprehension, and constantly checking whether he had understood his line of questioning correctly.  When the spectator intervened Klaus asked if it was supposed to be a mass discussion, because if it was he would keep his mouth shut!  So this was in fact an anti-interview with Klaus questioning everything.  All I know is, I have to brush up on my German double-quick!

11 Responses to Klaus Kinski and the sexual microphone