Klaus Kinski in London and other stuff

Unfortunately Klaus Kinski was not a big fan of England – he thought the food was “rubbish” and said you “…can’t eat it without getting stomach cramps.  Everything is oversalted and hard or mushy.  As if it weren’t sick and arrogant enough that they don’t serve beer between two and six in the afternoon.  Just because some drunken slut of a queen had a sadistic idea that only she can get sloshed!  And then that fish and chips!”  That’s Klaus talking about his hatred of England in Kinski Uncut (Bloomsbury, London, 1997).  Brilliant!

Anyway, after doing Klaus Kinski in Berlin (Pt 1), as I live in London I thought I ought to do a Klaus Kinski in London article – this is part one, I hope, as I would like to track down more information about where and when Klaus worked in the UK.  Excuse the fact that I only have two locations so far; there is work to be done here and if anyone has any suggestions or information on where Klaus worked in London (or thereabouts) then do contact me to let me know.  In the meantime, I went out armed with my Diana F+ camera to take some photos for the blog…

I read an article from Ms London magazine about Klaus Kinski’s work on Nosferatu.  In the article (An everyday story of Creative Folk?, 14.05.79) the author, who had the improbable name of Minty Clinch, said that Klaus’ selected haunt during visits to London was Blakes Hotel.  So I had a look at the website:  http://www.blakeshotels.com/  It looks really stylish and just right for Klaus style glooming around, but, of course, when I went to visit it to take my own photographs for the blog it just happened to be surrounded with scaffolding; it did not look at all impressive.  I’m sure it’s still beautiful inside while they’re doing these renovations though, so don’t let that put you off booking a room – it’s a bit on the pricey side, but then it would be as nowadays people like Mickey Rourke and Gwyneth Paltrow stay there – apparently.  Ah, well, “Every once in a while you gotta roll the potato”, as Mickey Rourke once said – whatever that means! 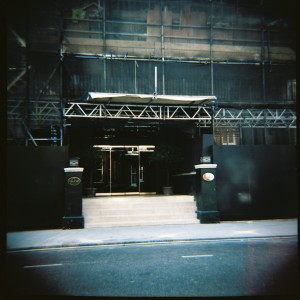 I love the fact that the house across the road is reflected in the glass on the doors!

Klaus played a slum landlord called Nikko in Gerry O’Hara’s The Pleasure Girls aka Die Goldpuppen (1965).  Nikko dated a young lady called Dee (played by Suzanna Leigh) who lived at 48 Lexham Gardens, which was one of Nikko’s properties.  In the film Klaus was never seen entering the property; he just rocked up in his posh car to call for his girlfriend or to drop her off at the house. 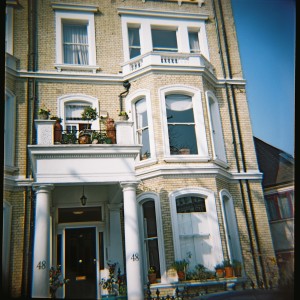 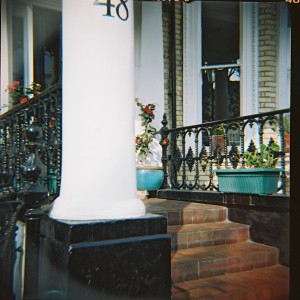 The girls were supposed to live in the second floor flat – the one at the top of the first picture with the balcony.  And in a famous promotional shot from the film, the actress Francesca Annis can be seen leap frogging over one of the bollards on the corner of Lexham Walk and Lexham Gardens, pictured above.  See the Du dumme Sau! review of The Pleasure Girls at: https://locotigrero.wordpress.com/2011/01/06/klaus-kinski-gets-a-whipping/

Finally, here is a Klaus Kinski Aguirre screenprint that my boyfriend made for me recently and I thought I should share here:

Another review follows early next week.