Time is not on my side this week – Revenge of the Stolen Stars is not yet finalised and I won’t have time now until early next week.  Verdammte Scheiße!

So, in an attempt to make sure I upload new stuff regularly, I’ve scanned some more French film trade cards and a couple of postcards – hope you like them.

Here’s a famous shot from the film Nachtblende (dir Andrzej Zulawski, 1975), with Romy Schneider – I’ll get around to reviewing this some time soon as Klaus is excellent in this strange film: 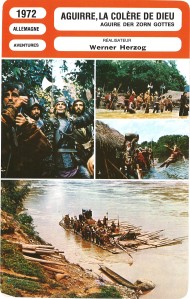 I’ll review Aguirre one day but the Herzog films deserve some serious consideration, so they’ll be saved for later.  In any case, the Herzog films get a lot of attention; the smaller more obscure films are the ones we need to know more about, right?

This is the French film trade card for Grand Slam (Dir Giuliano Montaldo, 1968) – I’ve not yet seen this film but fully intend to as I saw a clip on YouTube and Klaus looked absolutely amazing in it!

And, finally, here’s the French film trade card for Coplan sauve sa peau (Dir Yves Boisset, 1968), which, again, I have not seen:

Although Klaus does not feature in the photographs on this card I understand he has a key supporting role and I guess he gets it on with Margaret Lee (as per usual)!