Basic plot:  Jonathan Harker, a trainee lawyer from London goes to Transylvania to assist Count Dracula with papers for a property deal.  Harker finds he is being held captive at Count Dracula’s castle and after a nightmare about the brides of Dracula awakens with two small wounds on his neck.  He throws himself out of a window in an attempt to escape the castle and when he awakens he is being treated in Van Helsing’s private clinic near London.  Harker’s fiancée, Mina, and her best friend, Lucy, visit him and find themselves drawn into Van Helsing’s investigation of Jonathan’s condition and the mysterious Count Dracula.

Availability:  Count Dracula is available from Amazon in NTSC Special Edition DVD format and costs around about £12 including postage costs. 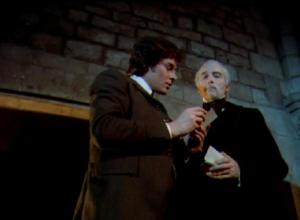 The film in full – *SPOILER ALERT*:

There’s not a lot of point in going into any great detail about the premise of the story; everyone’s seen Dracula films before and/or read the novel.  This film follows the standard structure for Dracula adaptations and, surprisingly for a Jess Franco film, there are no nude ladies involved.  The poss

ibilities for female nudity were endless (I had imagined Soledad Miranda would be wearing a cape à la She Killed in Ecstasy for her role as a vampire) but Franco was obviously taking this adaptation as seriously as he could and was hoping that it would be the most faithful adaptation of Bram Stoker’s novel.  It’s a pretty good attempt at one in any case and should not be dismissed as “trash” just because it’s “a Jess Franco Film”.

The cast are great – Klaus as ever on form; Christopher Lee and Herbert Lom give good solid performances (Lee makes the Count an almost gentlemanly, sensual vampire);  Maria Rohm and Soledad Miranda look absolutely beautiful, an 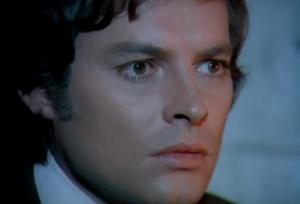 d Soledad in particular gives a wonderful performance as Dracula’s love interest; Fred Williams is incredibly easy on the eye as the naive Harker.

The mise-en-scène could at times be problematic for viewers, especially for those not used to seeing low-budget films (I’m not including myself here) – Franco almost consistently makes night appear to be day (whenever anyone ventures out at night, the sky is bright blue) and day appear to be night in the film (a cock crows, it’s daybreak but the next second Harker is in what appears to be a very dark lamp lit street); the wolves are clearly Alsatian dogs; the bat noises sound like monkey noises; you can almost see the string holding the “bats” afloat outside the window; the repetitive use of the mirror in the Count’s castle to show that he has no reflection; the boulders made of polystyrene; I could go on… But it’s pointless to criticise Franco for making low-budget movies (it’s what he does!) and there is some charm in the “look” of the film, good cinematography, a soundtrack from Bruno Nicolai that sounds like a cross between Nino Rota and John Barry (which can only be a good thing), the expected cameo appearance from Franco and other typical Franco quirkiness. 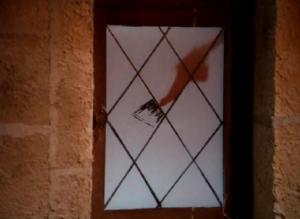 Yes, that’s supposed to be a bat outside the window…

I personally love the “Why do you look at me so strangely?  Why does everybody look at me like that?” sequence of character faces:

And the extensive use of stuffed creatures for no apparent reason was something else that I just found amusing.  Are they really that scary? Jonathan Harker and Quincey Morris obviously seem to think so…

Christopher Lee may have the role of Dracula in this film, but Klaus, without really speaking a word, steals the film as far as I’m concerned.  Call me biased if you like but Klaus as the mute, zoophagous maniac Renfield made compulsive viewing. From the first moment we see Renfield throwing his food at the wall I knew it wa

s going to be good.  Rubbing the food into the wall and seeming to take great pleasure in this, it’s not long before the Klaus in Renfield obviously starts to think how disgusting it is to have food all over his hands and he repeatedly flicks his hands to try to get the food off (I’m sure he got some alcohol out as soon as the cameras were off him so he could give his hands a deep clean!).

And who’d want to eat such disgusting looking food when you have secreted a box of bugs in a hole (the dunny?) in your

cell?  Yes, Renfield likes to eat bugs.  Apparently this is because he wants to consume their life, because their life force will then become his.  This is not apparent from the film – Renfield just looks like a lunatic who likes to eat bugs in the film, but that’s okay as that requires no explanation.

Renfield seems to have some psychic connection with Count Dracula and senses that he is nearby, jumping onto the window ledge to look at the house acrossthe way which has been purchased by the Count who wants to start “a new life in a new land”.  From time to time Renfield becomes very agitated and screams (although we never actually

see Renfield shouting or screaming in the screen space), at these times Doctor Seward usually tends to him and is very gentle with Renfield.  It becomes clear as the film goes on that Renfield’s seizures, screaming and crying tend to coincide with times when Dracula is in close proximity and/or is carrying out his attacks.

Van Helsing explains, “The man whose voice you hear was once as sane as you or I.  He had a daughter, young and beautiful.  Together they were travelling in Transylvania.  They stopped in a town called Bistritz.  One night the girl was found unconscious in her bed; half dead from loss of blood.  Day by day, like the fly who is the spider’s prey, she grew weaker.  Her father watched and waited by her bedside.  Until one night, when she was close to her end, the neighbours heard a terrible shriek – and the father as he is now.”

Despite the fact that Renfield clearly abhors Dracula and is upset by his presence, at times he too appears to be under the Count’s spell.  Sensing the Count is in his new home and seeing him appear at the window, Renfield breaks his way through the bars on his window and then throws himself to the ground causing himself several injuries; he has to wear a neck brace and has his arm in plaster.  Doctor Seward feels

that Renfield’s sickness has passed and tries to get him to communicate.  He asks Renfield what he knows and although we do not hear him speaking we can hear grunts and Seward obviously gets enough information out of Renfield to be able to inform Van Helsing that Dracula now lives in the house across the street.

As a result Mina says she would like to speak with Renfield as he could be the key to Count Dracula.  Van Helsing consents to Mina’s request and agrees that it’s possible Renfield may reveal more to her than he does to the staff at the clinic.  Unfortunately for Mina the Count decides to take control of Renfield once more and orders Renfield to kill Mina.  Renfield obeys the order and grabs Mina by the throat, fighting off the warden to strangle her.

But as Jonathan Harker, currently being attacked by Count Dracula’s stuffed animal minions, shows Dracula a crucifix, the Count’s powers abate.  At that moment Renfield releases Mina from his hold.  When we next see him he is in a strait jacket, or rather, looks like we’re supposed to believe he is in a strait jacket – a cut-price one.  Look at th

is picture – this looks like a blanket wrapped around Renfield, held in place with several belts.  Renfield’s hands are actually not held in place with anything, Klaus is holding his arms across his chest but his hands are clearly totally free, meaning he could easily open the belts and free himself.  That the warden should look so smug and say to him, “I’d like to see you find your way out of that, my lad”, is therefore laughable. 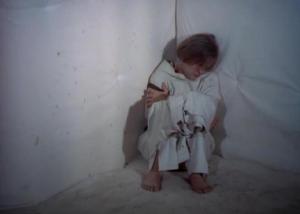 he word Varna, which is where Dracula is headed.  Shortly afterwards Seward finds Renfield dead in his cell.  For a character who only appears for about 8 minutes of a 93 minute film, Renfield is key to the action and thanks to his information Jonathan Harker and Quincey Morris are able to track down the Count and put an end to his life by setting fire to him in his coffin.

Count Dracula is well worth a watch.  It’s got everything you can want in a vampire film: 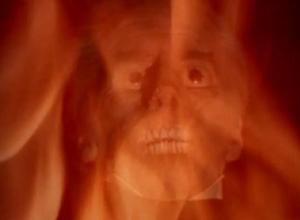 To round off the review, here’s Klaus catching insects: 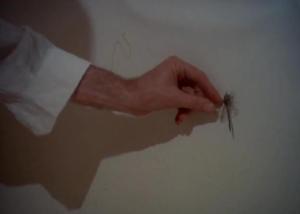 What more can you ask for?

Other information about the film:  In biographical notes of Klaus Kinski on the Venom (Dir Piers Haggard, 1981) DVD, Jay Marks and Waylon Wahl recount a story about Dracula: “While making Jess Franco’s Count Dracula (1969), in which he played the lunatic Renfield, Kinski castigated Franco for shooting his scenes on a set instead of in a real sanitarium cell.  Franco responded by telling the actor: “I had planned to shoot it in a real cell but then it occurred to me that they might not let you out!””